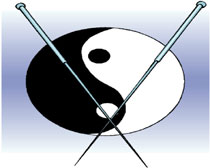 Acupuncture, one of the world's oldest and most established healing practices, is growing in popularity as a way to complement the modern procedures of ART - Assisted Reproductive Technologies. Although the scientific evidence behind acupuncture is scanty, belief in this technique is so strong, some patients having just undergone implantation after IVF will head straight to their TCM (Traditional Chinese Medicine) practitioner for an immediate acupuncture treatment. Acupuncture is just one component of Traditional Chinese Medicine (TCM), which also involves herbs, pelvic massages and dietary adjustments to garner a "whole body" systems approach to health. Following a track record of over 4000 years, nearly one quarter of the world's population turns to TCM for their primary heath care. In Western societies, acupuncture is frequently cited as providing almost instantaneous relief to debilitating ailments such as bad backs and sports injuries. Tiny sterilized needles are inserted into key points of the body and left there for 20-30 minutes. Barely felt, the needles reportedly open up Qi (pronounced Chee), which is vital energy defined by increased blood flow and the benefits of the body's systems working together to break down so-called blockages. Only two scientific research studies have examined the benefits of acupuncture with IVF treatment. The most talked about was reported in the journal Fertility & Sterility, April 2002 (Vol. 77, No.4) involving 160 IVF patients in Germany. Half of them underwent acupuncture before and after embryo transfer and the other half served as the control group. 34 out of the 80 women who received acupuncture revealed clinical pregnancies (42.5 %), whereas, 21 out of 80 women in the control group became clinically pregnant (26.1%). Although the physiological mechanisms are not fully understood, it is believed that acupuncture optimizes endometrial receptivity and enhances blood flow to the pelvic area. According to TCM principles, energy flows through the body along pathways, or meridians. Acupuncture is a means of enhancing this energy and coaxing the body's responses to induce a desired physiological effect. Ideally, according to TCM practitioners, women should undergo acupuncture treatment 3-4 months prior to an IVF cycle instead of as a last minute flurry. We at PFC encourage our patients who inquire about acupuncture to pursue it, and we provide a list of Bay Area TCM practitioners who are certified by the National Acupuncture and Oriental Medicine Alliance and licensed by the state of California. (UPDATE: PFC now provides in-house acupuncture services.) However, under no circumstance do we condone the use of herbal supplements that are sometimes provided with acupuncture for women undergoing infertility treatment at PFC. Most TCM practitioners agree with this approach, and will communicate your treatment protocol with our physicians here at PFC.