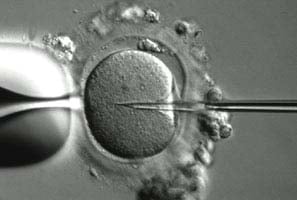 In vitro fertilization with intracytoplasmic sperm injection (IVF-ICSI) has made a significant difference in the lives of thousands of couples facing infertility due to severe male factor -- problems within the male reproductive system or the sperm, which account for 40% of all infertility cases. The process of injecting sperm into eggs at the time of in vitro fertilization was developed in 1992 and has now allowed for the birth of thousands of children whose parents would have otherwise not been able to conceive. Since the IVF with ICSI procedure has a shorter track record, compared to a thirty year plus history for the IVF procedure, scientists and infertility specialists have been carefully monitoring children born utilizing IVF-ICSI. Prior studies of the genetic makeup of children born after being conceived via IVF-ICSI have reported that the risks of chromosomal abnormalities may be slightly increased as compared to natural conception. But these studies have been inconclusive. However, a new study, presented at the annual meeting of the European Society for Human Reproduction and Embryology in Madrid, Spain this summer, prompted a collective sigh of relief. This extensive study involved 1,500 children from several European countries, who were followed up to age 5. The study was designed to examine both birth defects and mental development differences. All the children underwent a thorough physical examination, including checking for birth defects, hearing and vision tests and psychological development. Although the rate of birth defects was slightly higher in the IVF-ICSI group at 5 years of age, there were no differences in language or physical skills, and no differences in behavior and temperament. The amount of difference seen in birth defect rates was not considered to be statistically significant enough to warrant concern. Moreover, the lack of difference in developmental skills was clearly an indication that IVF-ICSI children are expected to grow into thriving, healthy children. The results of this study should be reassuring to parents of children conceived through IVF-ICSI, or those who are considering undergoing this procedure. The vast majority of children that result from the IVF-ICSI process do very well and show no major differences as compared to naturally conceived children. If you are particularly interested more background and further details of this study, please read further IVF-ICSI Study Details