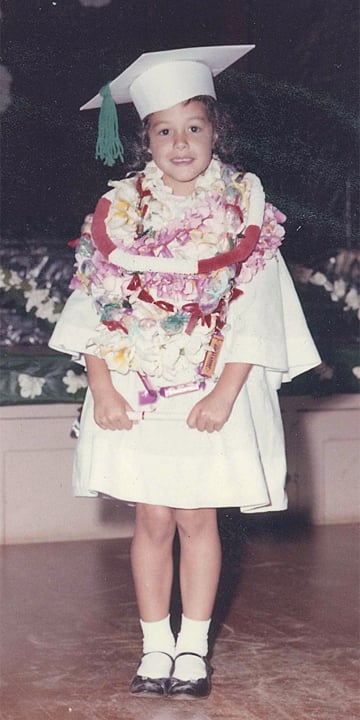 I was born in Wahiawa, Hawaii in 1957, two years before Hawaii became a state. My mother was a Nisei Japanese woman, born and raised on the Big Island of Hawaii, where I hope, if I live long enough, to retire someday. My father was a Texan, raised on a dry land cotton farm in the Panhandle of Texas. He was adopted so I don’t know his genetic and ethnic background, but we suspect perhaps Welsh-Scottish. My parents met in Hawaii during WWII. I grew up the youngest of four children. I have two older sisters, with whom I am very close, and I had an older brother I loved very much but lost to kidney cancer two years ago. My mother never got to graduate from high school as she had to help her father in his general store, but she was a remarkably intelligent woman with a life-long thirst for knowledge. She received her G.E.D. at age 42; in another time, she could have been a very accomplished career woman. I was very lucky to have her for a stay-at-home mom. My father finished high school and joined the Navy just before WWII. He never went to college, but worked for the US government all his life in civil service for the Army. He rose to quite a high rank by the time he retired, due to his diligence and competence. We lived in Hawaii until I was 8 years old, then we lived in Okinawa, Japan during the Vietnam War (1965-1973). After that, my father was stationed at Ft. Hood, Texas. It was good for him to return to his home state after 35 years on islands, but hard on my mother and me, who had always lived on tropical islands with Asian culture. I graduated from high school in Central Texas and, not knowing what I wanted to do, enrolled at the University of Texas at Austin, because it was inexpensive and close to home. This was a stroke of luck because I received a wonderful education there for very little money, and it paved the way to medical school. I worked all kinds of low paying jobs to help pay my way through college, as my parents didn’t really have much money. I entered the university as an English major, as I loved literature, but quickly realized there would be no work in that field. I took a biology course my freshman year and absolutely fell in love with it. I considered being a biologist, a veterinarian (I love animals!) and eventually realized I wanted to work with people, not animals and not at a research bench. I went to medical school in Dallas, at the University of Texas Southwestern Medical School. This school has an incredible reputation for excellent research (they are always in the top 2-3 medical schools in the nation to receive NIH grant money), a well-developed program of philanthropy that supports their mission, and most of all, the best teachers one could have. I feel truly blessed to have been able to attend that wonderful medical school.

During medical school, I had a job (always working!) in a research lab that was doing research on how the genes that make FSH work. That experience exposed me to reproductive endocrinology early in my career. I was even able to publish a few papers during medical school. Small stuff, but it felt great at the time. During medical school, I discovered I liked many different specialties, but really liked caring for women. It was natural for me to go into obstetrics and gynecology. I stayed at Southwestern because their teaching hospital is Parkland Memorial Hospital, an incredible training ground for residents. During my four years there, I delivered thousands of babies, performed or assisted about 600 Cesarean sections and did all kinds of gynecologic surgery. It was very hard work, but gave me a sound foundation and a lot of confidence that I could do most anything. I remained interested in Reproductive Endocrinology, although at the time, in vitro fertilization was just beginning to develop around the country and wasn’t the major emphasis in the field. Back then, the specialty was more about taking care of menopausal women, doing surgery for infertility (especially endometriosis, because at the time, we thought surgery helped fertility for these patients, something we now know isn’t really true) and doing microsurgery to put the tubes back together for women who had previously had their tubes tied and now wanted to be pregnant again (we now treat this with IVF). I decided that rather than going into practice in general ob/gyn, I would continue two more years of training to become a Reproductive Endocrinologist.

After 17 years in Texas and 8 years at Southwestern, I knew I wanted to go somewhere else and gain new experiences and exposure to different teachers. I only applied to a few fellowship programs and was fortunate to be accepted to my first choice: the University of California San Francisco. During my fellowship there, I met and was taught by the best mentor one could have, who is now my close friend and partner, Dr. Eldon Schriock. At the end of my fellowship, I was incredibly fortunate to be recruited by him and the department to stay on as a faculty member. While there, we instituted many new techniques into the infertility program such as ICSI and PGD. We doubled the size of the IVF program. We also taught many of the Reproductive Endocrinologists that now practice in the Bay Area, including our own Dr. Isabelle Ryan. While at UCSF, we almost merged with Drs. Carl Herbert and Philip Chenette, who were in private practice in San Francisco, but due to a variety of reasons, we were unable to realize the merger with them within the UCSF system. We got to know them very well, though, and we knew we could work together.

![](http://www.pacificfertilitycenter.com/fertilityflash/vol8-3/Hawaii.jpg)Since I finished my fellowship, I knew I wanted to be part of a world-class fertility center that could provide the best care for our patients. For many reasons, during the late 1990s, this was becoming more difficult to do within the University. In 1999, when the previously existing Pacific Fertility Center came up for sale, Dr. Schriock and I got together with Drs. Herbert and Chenette and took the opportunity to realize our dream. We were able to recruit Dr. Ryan to join us. It has been a challenging but very exciting 10 years at PFC but now we are all able to say that the dream has become a reality. I am getting to do what I love to do every day.
On a personal level, I met my husband Michael when I was at UCSF. We were so sure about each other that we married 7 months after we met! I was a little older by then and at first we struggled with the idea of whether we would try to have a family. Since neither of us had any family living close by and my professional career (as well as his business) was very time consuming, we realized we would be stressed-out parents living the day-care life. We finally decided to live child-free. I only regret not having adult children to be proud of and having grandchildren to spoil. We now live in Marin and our children are our two dogs that I adore and spoil way too much. I love gardening, boating, cooking, reading and travelling. I don’t really have a passion for any particular hobby, just a passion for my work. But someday, as I said, I hope when I retire to return to Hawaii. Even though we left there when I was young, it is a big part of my family’s history and culture. I feel most at home with the aloha I feel when I am there. I would love to volunteer at an animal shelter after retiring. I still sometimes wish I had gone into veterinary medicine, but I think I will enjoy it more as a volunteer and since I have the best job in the world, that will have to wait for another lifetime.
— Carolyn Givens, M.D.
Posted on August 11th, 2010
Tags: Physician Odyssey, PFC Doctors & Specialists
PreviousNext
Share: