My Journey To PFC -- Rosemarie Tagle 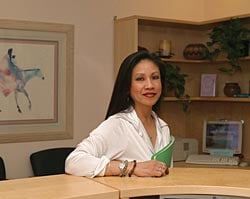 My Name is Rosemarie S. Tagle. I am the billing manager at Pacific Fertility Center. I was born in the Philippines, the youngest child in a family of six children--three boys and three girls. Our parents brought us to America to seek a better life and for better opportunities. We immigrated to the U.S. when I was only three years old. We were fortunate that our father served in the United States Armed Forces during World War II because this gave him preferential treatment; we were classified as non-quota immigrants and were able to come to the U.S. without any problems; others weren't as lucky. In 1967, my family sailed to the United States on the USS Cleveland Cruise Ship. At the time, with six children in tow, it was the most economical way to travel. The journey took us nineteen days. We disembarked at Pier 37 in San Francisco. Waiting for us was our father who arrived a year earlier to get settled and prepare for our arrival. We have remained in San Francisco ever since. I chose a secure career in the health care field and obtained my Medical Assistant certificate at Bryman College in San Francisco. My first job was working in an Ophthalmology practice. It was a one-physician office with a receptionist, the doctor and me. I enjoyed being a Medical Assistant; however, when a position for Office Manager became available in the Ophthalmology practice, I was ready for more challenging work. I applied for and was offered the job and stayed with that practice for the next fifteen (15) years. The practice grew during those years from just two to a total of nine employees under my management as well as an addition of an Optometrist and an Optician. Eventually, the office expanded to include the first Optical boutique in San Francisco. Sadly, I left the practice in 2000 after Dr. Leon B. Metz, Jr., the physician for whom I worked, developed cancer and passed away. I was devastated. Dr. Metz, along with his wife and children, became my close friends over the years. I credit Dr. Metz for teaching me the ropes of running a practice well and helping me grow. Though I had the opportunity to continue to work at the office, I decided that it was time to move on. Shortly after my decision to leave, I heard of a job opportunity at Pacific Fertility Center. At the time, I knew little about IVF or other fertility treatments, but it sounded like an interesting place to work. In 2001 I joined the PFC team. Although I knew it would be an adjustment moving from a small office to a larger one, it did not take long for me to realize that I was going to enjoy working at PFC. On a personal note, I am the mother of two children; my daughter is 23 years old, and my son is 20 years old. My daughter is a nursing student at San Francisco City College. My son is in the process of obtaining his Barber license and is hoping to open his own shop. I also have a five-year old granddaughter who is in kindergarten and is my pride and joy. During my free time, I take ballroom and Salsa classes, and occasionally have the opportunity to perform. I also enjoy taking classes at San Francisco City College where I recently obtained an A.S. degree in Administration of Justice/Criminology and a certificate in Forensic Science. I came to this new degree in the process of trying to help a relative who was in trouble with the law. My family and relatives were struggling to understand what was happening, so I became the family's resource for "information interpretation" and stepped in where I could to help during the justice process. I have learned so much since I started at PFC six years ago. Working here has been a very rewarding and challenging experience. Being the financial manager allows me to see first hand the financial sacrifices that couples and/or individuals make on their journey to becoming parents. I am proud to be a part of a team that can help fulfill that dream. I admire and respect each of the physicians, as well as the rest of the PFC team for their total commitment and dedication to providing the best possible care to patients without reservation. I feel very fortunate to be a part of this team and to be working towards the same goal. Being a manager in any medical practice is always a good way to help people, but this practice is special. We are in the business of giving the gift of life.