The need to assure our patients of the highest quality care requires that we bear this in mind – the healthiest pregnancy is a singleton pregnancy. Pregnancy requires the cooperation of sperm and egg, accurate transcription of the early genetic code in the developing embryo, a fertile spot for attachment to the mother in the uterus, and a route for getting there. All other factors being equal, pregnancy rates almost double when two embryos are transferred instead of one, and increase again when a third and fourth embryo are added. The desire for high pregnancy rates has driven a desire for more embryos to be transferred 7 . Improvements in insemination technique, embryo culture methods, and transfer efficiency have added substantially to pregnancy rates. Each embryo transferred today has a considerably higher chance of producing a pregnancy than an embryo transferred twenty years ago. Such improvements have enabled us to think about ways to reduce the risk of multiple pregnancy by transferring fewer embryos. The development of blastocyst (day 5 embryo) culture techniques allows the selection of high quality embryos for transfer. The blastocyst stage requires advanced incubation techniques with low oxygen incubators and specialized culture media. A tight quality control system is also required. The blastocyst stage is a more advanced stage in which the genetic code of the embryo is fully activated and working. Only the healthiest of embryos can move to the more advanced stages, allowing selection of the best embryos for transfer. In 2006 the ASRM published guidelines for number of embryos to transfer: 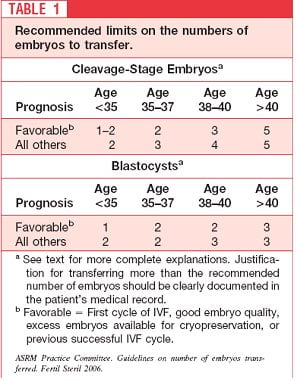